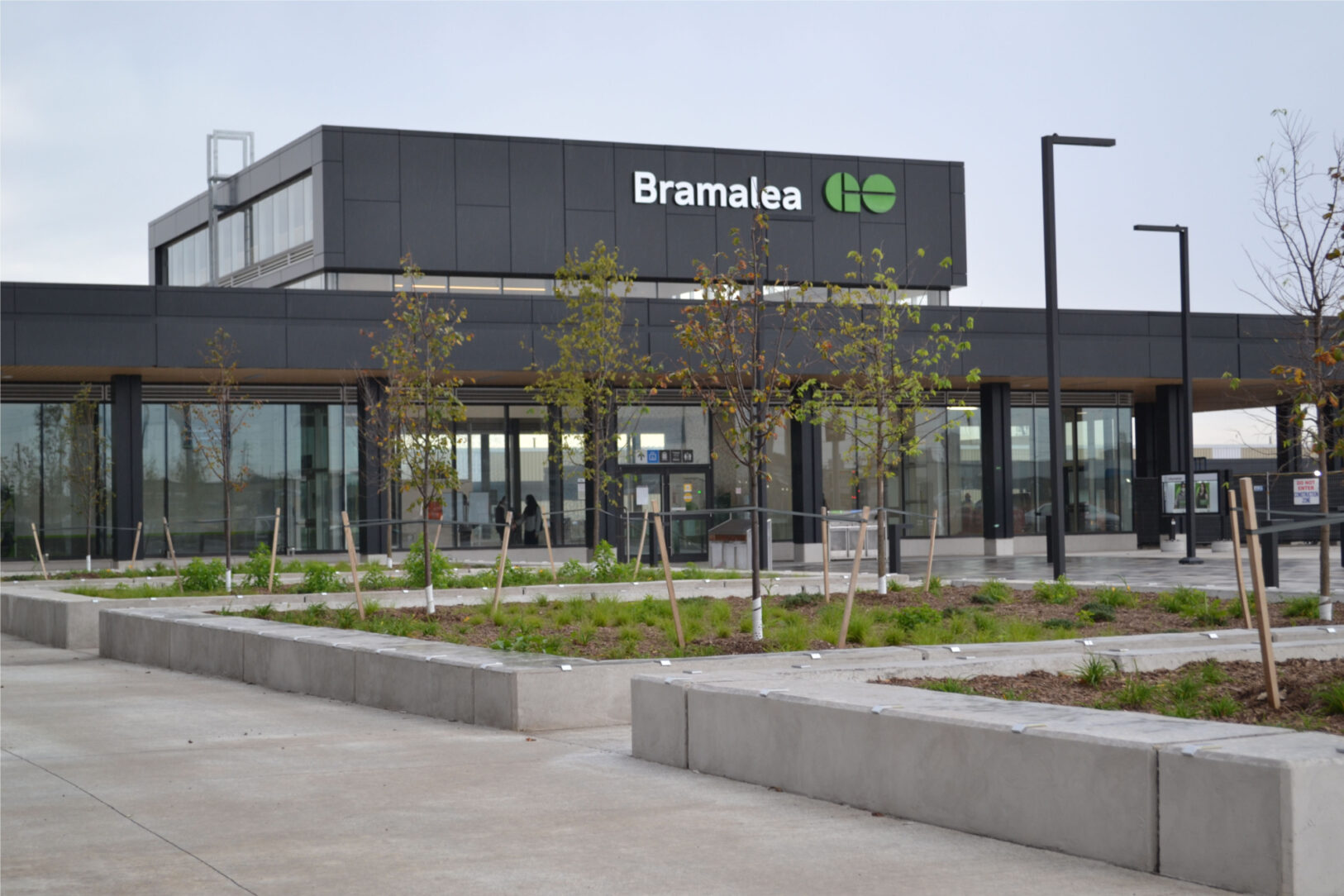 This has been a great project with our partner Kenaidan Contracting knowing it will help the community greatly, and improve transportation needs of the public.

GO Transit, a division of Metrolinx, is the regional public transit service for the Greater Toronto area. Over the next 10 years, they plan to double the number of train trips during rush hour and quadruple the number of trips outside of rush hour and on weekends. To achieve these goals, they have outlined a number of modernization and expansion projects to accommodate the increased traffic. The Bramalea GO Station in Brampton, Ontario is one of the stations included in the development plans.

Bramalea GO Station is a bus and railway station that connects commuters to the Toronto downtown core at Union Station in approximately 30 minutes. The redevelopment plan for the station targeted improving the customer experience and overall passenger safety including additional parking, updated amenities, and enhanced accessibility. One of the important new features is a continuous, overhead steel canopy. On the surface, the value of an overhead canopy is simple – shielding passengers from inclement weather as they wait for their ride. This shelter is crucial in the continental climate of Ontario that can be rainy in the spring and snowy throughout winter. What isn’t as apparent is how the canopy protects the newly upgraded electrical and mechanical equipment including lighting, electrical systems, PA system equipment and electronic display boards.

There are numerous factors that contribute to the corrosivity of the environment this important canopy is situated in. If you have ever seen a vehicle that has survived several snowy winters, you will likely notice rust along the painted wheel wells and bottoms of doors unless the owner paid immaculate attention to cleaning all throughout the winter. There are two reasons this rust appears more quickly on vehicles in northern regions. First, the salts used to melt the slippery and dangerous ice on roadways and sidewalks is corrosive to metal. The deicing salt absorbs water from the air and increases the water’s ability to carry a current which speeds up the corrosion process. The chloride ions in the salt can also break down some protective barriers. The second contributing factor is the freeze cycle. During icy or snowy weather, debris freezes to vehicles and structures. When this ice is knocked off, it can crack painted coatings creating voids in protection. Finally, the constant flow of trains and buses mean high levels of exhaust fumes polluting the area which can also be damaging to the surrounding structures.

With decades of experience building new transit stations, GO transit has witnessed various corrosion protection systems in use. They knew a painted coating would not provide adequate protection from this abusive environment. Damage from deicing salts, frozen debris and exhaust fumes would require frequent attention, touch-up and repair which becomes costly and inconvenient. Based on previous success, the team knew hot-dip galvanizing would be a more reliable and durable solution as well as more economical throughout the life of the structure. Hot-dip galvanizing provides a stronger barrier for protection that is difficult to damage and the zinc patina will elongate the service life by slowing the rate of zinc corrosion to about 1/5th the rate of painted steel.

The redevelopment of the Bramalea GO Station has laid the groundwork for handling future population increases and commuter demands projected for Brampton. Hot-dip galvanizing was selected as the means to protect the steel used throughout this project due to corrosion performance, longevity and sustainability. The upgrades at this station are part of a long-term plan including 29 station refurbishment projects along the Kitchener Rail Line. The Bramalea GO Station upgrade project was one of ten active construction projects along the line. Hot-dip galvanizing is likely to play a role throughout all the transit projects in the region.